This work is a result of the influence of poetry on bronze. The poet David Antin has a text in his book " I never knew what time it was" in which he discusses the mechanism of a mousetrap as a possible model by which an art work can embody an idea. The Text that accompanies the work is as follows:

Dear Doctor, I wanted to send a photo of a a work that, in some odd way, you were the genesis of. It related to your discussion of the firing sequence of a mouse trap and the distinction between peanut butter mice and jelly mice. You had said that there was a typology of appetite and that one could not be enticed into a trap if presented the wrong bait. I was having a home rodent battle . I had always used peanut butter or almonds. I decided to take the poets advice and use strawberry jam on the almond. In the middle of the night I heard a snap ,then silence. The sound of tremble ,which usually signifies a catch was absent. I went to sleep wondering if perhaps it had been an accidental closure. The next morning i pulled the trap from under the hall cabinet. Seeing one small creature and then two mice had been trapped by a single blow.The trap and occupants were immediately invested in plaster and burned out in a kiln to prepare the mold for the pouring in of bronze. They record the rare event with at least topographical accuracy. 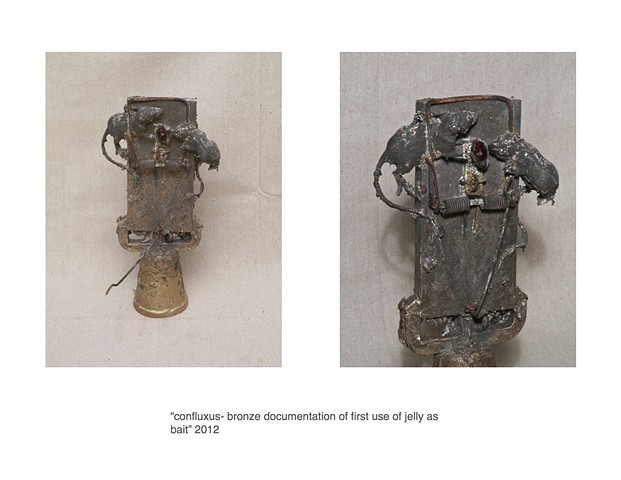